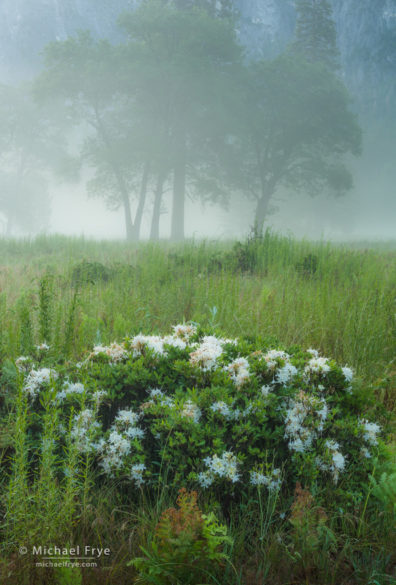 Oaks and azaleas in the fog, Yosemite NP, CA, USA

One of the biggest challenges in landscape photography is deciding where to go and what to photograph. Technical skill and an eye for composition are always important, but it certainly helps to put yourself in the right place at the right time.

Of course everyone has their own preferences about the types of subjects and images they’d like to photograph, and that’s always part of the equation. And different people can have different but equally successful approaches to finding the subject matter that suits them.

In my own photography, I sometimes come up with concepts for images and then try to execute those concepts. That kind of pre-planning requires a lot of cooperation from Mother Nature, as clouds, wind, or other variables can throw a wrench into the works. But once in awhile things actually go according to plan.

More often, however, I just go with the flow. I’ve found that reacting to the conditions at hand is usually far more productive than pre-planning and hoping that the weather cooperates.

In using this approach, the first question I ask myself is: “What’s happening now?” What’s different or unusual about this particular time in this area? What conditions could provide the ingredients for an exceptional photograph? The answer includes the weather, of course, as weather plays a big part in every outdoor photograph. Is it sunny, cloudy, foggy, raining, or snowing? Is a storm approaching or leaving? Is it windy? Is there a pattern to the current weather, like daily morning fog, or afternoon thunderstorms?

But another part of the answer involves other conditions – things besides the weather. What’s the season? Are flowers blooming somewhere? Is there fall color? Snow? Bare trees? Are water levels unusually high, or exceptionally low? Are some places accessible now that usually aren’t? If you’re near the ocean, is there going to be an unusually high or low tide soon?

Every condition provides unique opportunities. While it’s wonderful to have high water and gushing waterfalls in Yosemite Valley, low water actually produces better reflections in the Merced River, and potentially more interesting foregrounds. And there’s no question that trees look great when decorated with autumn leaves or fresh snow, but bare branches and trunks can also be photogenic. Regardless of what conditions you find, you’ll always make better photographs when you accept what you’re given and try to find the beauty in it.

Two recent day trips to Yosemite might serve as examples of this approach. The first trip was on June 13th. It had rained the day before – not a huge dump, but about four-tenths of an inch fell in Yosemite Valley. That was enough to create a chance of fog or mist along the valley floor in the morning, so Claudia and I woke early and made the drive up there.

If conditions were right I thought I might go to Tunnel View. From that perspective in June the sun hits the valley floor near Bridalveil Fall early in the morning, which can create some beautiful backlit mist.

But upon arriving in the valley we found no fog in Bridalveil Meadow, and not much mist in general. That was a little disappointing; after forcing my eyes open at 3:30 I was hoping for spectacular conditions that would make that early alarm worthwhile. But okay, I said to myself, it is what it is, and I’m up, and here. What else is there? What’s happening now that’s interesting and unusual?

Well there was some fog in El Capitan Meadow. There might have been fog in some of the other meadows in the eastern end of the valley, but there’s that saying about a bird in hand…

And I did find azaleas. Some had already dropped their petals, but others were blooming and in prime condition. I spent the next half hour looking for ways to juxtapose clumps of these flowers with foggy oaks; the composition at the top of this post is my favorite from that time.

And then things changed, as they always do. The sun started to reach the far end of the meadow. I thought about staying where I was, and hoping to photograph the sun breaking through the fog and hitting the azaleas. But that was a low-percentage play, because it would take awhile for the sun to get to where I was standing. There was no guarantee that the fog would stick around, and in the meantime I might miss some interesting moments of sun and mist on the other side of the meadow.

In other words, the most interesting thing happening at that moment wasn’t the azaleas in the fog anymore, it was the backlit trees and mist on the other side of the meadow. Time to move.

I found three ponderosa pine trunks highlighted by the sun, and then a backlit oak along the edge of the meadow with evaporation mist rising from its top. And yes, the fog was gone by the time the sun reached the azaleas. 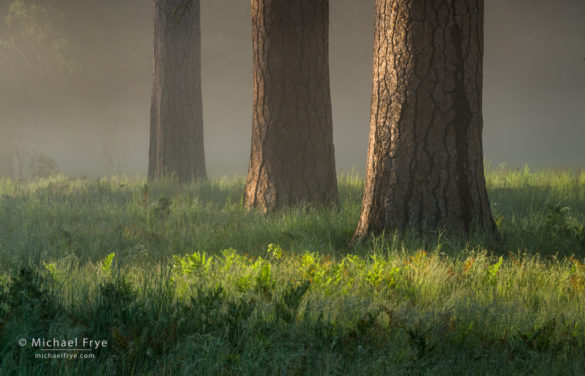 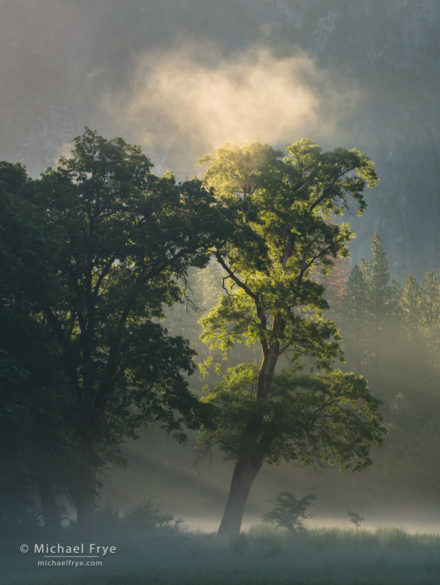 A week later we decided to head up to the Yosemite high country. The weather was clear and sunny – a typical summer day. But there were a couple of potential opportunities that weren’t typical, or at least haven’t been during the last few years. First, there could still be ice on some of the high-country lakes. Second, plenty of snow remained in the high country, and it was melting rapidly in the warm weather, so there should be a lot of water in the rivers and creeks.

I decided to take advantage of the high water flow and hike to a spot where a creek cascades through a granite bowl. The clear skies would be perfect for this location because I knew that the late-afternoon sun would hit a ridge above the bowl and create golden reflections in the water below.

Although I’d been to this area before, the high water made crossing the creek difficult and necessitated finding a new route. But we made it, despite taking a few wrong turns, and I was able to make the photograph I had envisioned, or planned, with the water cascading down the rocks and golden reflections along the side of the creek: 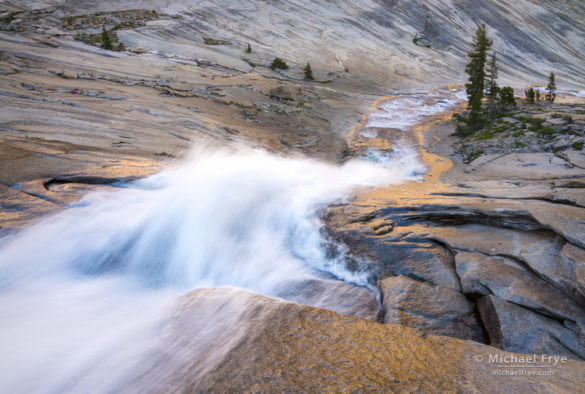 But what I didn’t anticipate was the profusion of wildflowers in this basin. Penstemons, wallflowers, and paintbrush were growing out of cracks in the granite, creating an unexpected opportunity to juxtapose those flowers with the cascading water. It wasn’t easy to find compositions that combined those different elements in a harmonious way, but I kept looking and eventually found a couple of arrangements that seemed to work: 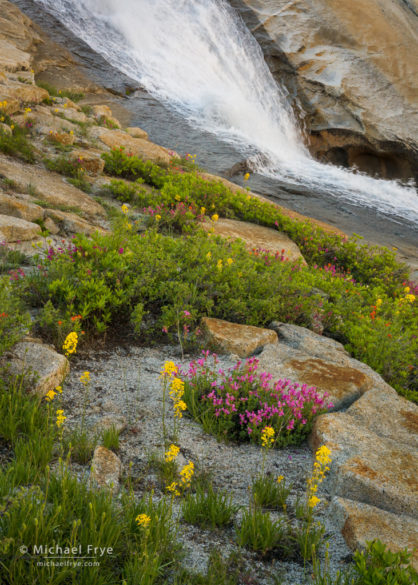 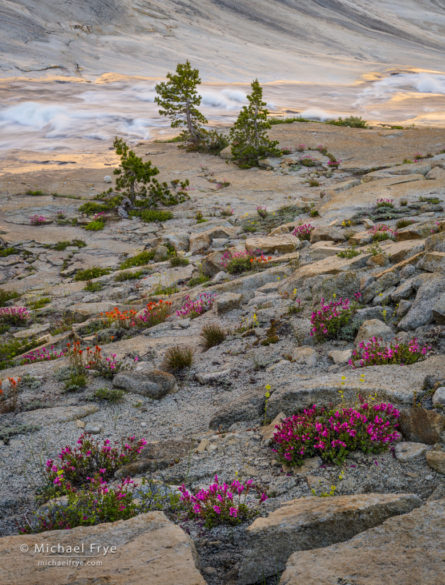 My original idea for that location was pre-planned, but based on one thing that was unusual and interesting in the park at that time: the high water. The flowers were unexpected, but once I found them they became the focus of my attention, because I realized that I was unlikely to find that combination of granite, high water, and flowers again anytime soon.

So what’s interesting and unusual in your neck of the woods these days? What’s happening now?

Related Posts: A Different Point of View; May Showers; Dogwoods, Fog, and Reflections

Michael Frye is a professional photographer specializing in landscapes and nature. He is the author or principal photographer of The Photographer’s Guide to Yosemite, Yosemite Meditations, Yosemite Meditations for Women, Yosemite Meditations for Adventurers, and Digital Landscape Photography: In the Footsteps of Ansel Adams and the Great Masters. He has also written three eBooks: Light & Land: Landscapes in the Digital Darkroom, Exposure for Outdoor Photography, and Landscapes in Lightroom: The Essential Step-by-Step Guide. Michael has written numerous magazine articles on the art and technique of photography, and his images have been published in over thirty countries around the world. Michael has lived either in or near Yosemite National Park since 1983, currently residing just outside the park in Mariposa, California.